You can’t stop hearing about how you need to embrace social media for your marketing.  It can be overwhelming and exhausting just to think about adding social media to your business owner duties. I talk to clients daily about the importance of social media as an extension of their marketing efforts, but I also admit that as an agency we get lazy about keeping up with our own social marketing.  I personally like to blog more than post on Twitter, Facebook, LinkedIn, etc…. but I certainly know that it should be an active part of every small business marketing portfolio.  Here is a social media story that drives home how important it is while reminding me that we need to practice what we preach.  Enjoy…..

My partner, Brad Howard, can whip up an illustration for just about anything.  I have to say after being around graphic designers for over 15 years he is probably one of the most talented illustrators I have seen.  Because of his talent  he is often recruited by friends and family to do designs for our personal interests (thankfully for those special few, he obliges).  So one night, his oldest daughter, who is a soccer player and big fan of Megan Rapinoe  ( US Women’s Soccer team player), requested that Dad create her a t-shirt design of her favorite soccer player.

A couple of twitter fans tweeted the design over to Megan Rapinoe and @nikesoccer account and that is when Nike got involved.  They apparently were watching and tracking twitter activity surrounding the design.  The twitter followers begged Brad to get in touch with Nike.  A few days after Brad sent an email to Nike explaining the viral outburst, someone from the Nike Soccer branding team got in touch with Brad and bought the design and now they are available for fans to buy at Nike Soccer.

This is a GREAT example of the power of social media.  From a small request from his daughter all the way to offices at Nike.  A little doodle is now available to buy online.  I know you are thinking that this is crazy and no way can social media do that for my business.  Well, you never know.  If you had told me that someday Nike would call Brad about buying his design, I would have said you are crazy.  It is all about timing, relevancy, and uniqueness.  Brad had a great design (unique with a strong brand association), tweeted it while the US Women’s Soccer team was still relevant, and the end result is it became a reality.  Hopefully this story will inspire you to jump back into social media! 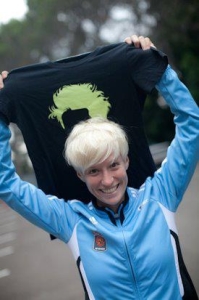 About the Author: brad howard